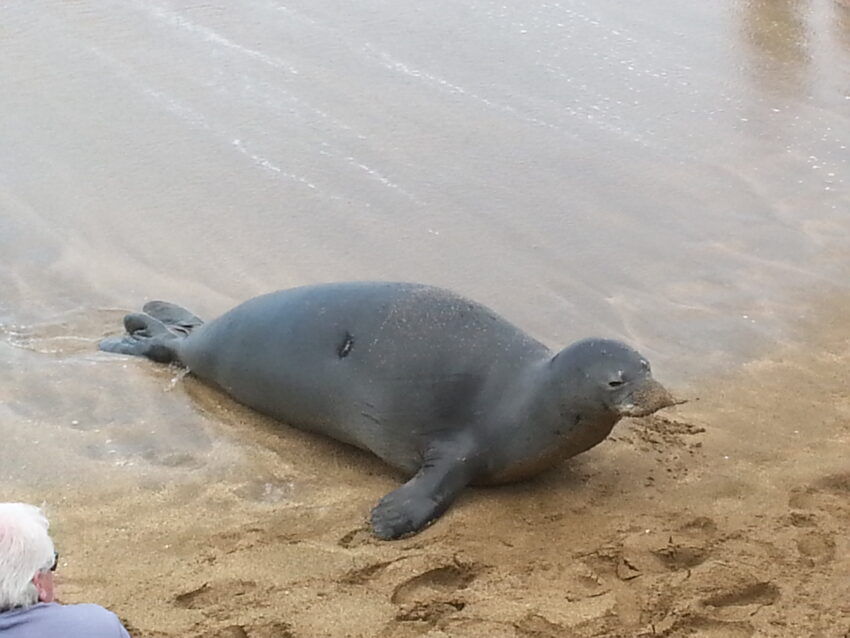 We’re not sure how you can reduce an entire island’s worth of wildlife to a Top 10, but who are we to argue? If someone says these are the animals you must see on your next visit to Maui, and accepted the Herculean task of examining every species and subspecies from Upoa Point to Hana Bay in order to reach an informed conclusion, we won’t ask why not a single even-toed ungulate made the list. Please read on to learn more about Maui’s Top 10 animals and why it probably wasn’t a good idea to introduce a diurnal predator (the mongoose) to combat a nocturnal pest (the rat). So, without further ado, here are Hawaii’s Top 10 animals as determined by a poll of top naturalists. Be sure to discover them on your next discount vacation to Maui through Vacation Now – the web’s number one provider of discount vacations to Las Vegas, Maui and Orlando.

Swimming with green sea turtles is a hugely popular activity among tourists, so it should come as no surprise that these cute, curmudgeonly creatures nabbed the top spot as Hawaii’s favorite animal.

Many visitors schedule their Hawaii vacation to coincide with the return of spawning humpback whales to the islands from December through April.  Each year these fascinating creatures, around 10,000 strong, make the long trek from Alaska to the warm waters around Hawaii to give birth and nurse their young. Maui, home to beautiful Sands of Kahana Resort, enjoys its rank as the prime whale watching spot in Hawaii.

Who doesn’t love a dolphin? Grabbing the third spot on this list of Hawaii’s 10 favorite animals is the Hawaiian Spinner Dolphin, so named because of its ability to leap spectacularly out of the water and make as many as four complete spins in the air.  Spinner dolphins can usually be spotted resting in shallow areas like South Maui’s La Perouse Bay during the morning before moving farther offshore to feed in the afternoon. Another popular hangout is off the coast of Lanai, where huge schools of spinner dolphins are seen regularly.

We’re not sure how the mongoose managed to beat out the Hawaiian monk seal (the state’s official state mammal) and manta rays for fourth on this list when they were basically brought to the island by mistake, albeit with the best of intentions to reduce an exploding rat population. The problem? Mongoose are active in the daytime while rats are active at night. So while the rats continued on their merry way destroying crops and sugarcane fields, the mongoose turned their attention to birds and bird eggs, endangering native bird populations in the process. We suppose they’re kinda cute in a ferocious carnivore kind of way.

The state bird since 1957, the Nene Goose can be found on Hawaii’s Big Island, Kauai, and Maui. While Nene Geese are known to mate for life and honk like a car, there is no hard evidence to prove a cause and effect.  While the largest population can be seen in the Hawaii Volcanoes National Park on the Big Island, the Nene Goose is also found on the summit of Maui’s Haleakala Volcano.

The official state mammal of Hawaii, the monk seal is endangered owing to habitat loss, disease, and human harassment among other factors. Currently there are fewer than 1,100 Hawaiian Monk Seals left in existence. It is a felony to visit harm on a Hawaiian Monk Seal, and many organizations throughout the islands are doing their best to keep this highly endangered species alive and well. Hawaiian Monk Seals are rarely seen due to their diminished numbers, but can occasionally be spotted basking on sandy beaches during the daytime. For more on the Hawaiian Monk Seal, see the addendum below.

Possessed with an ability to blend into their surroundings, seeing this invasive creature in the wild can be very difficult. That makes it all the more thrilling when you do! Look for chameleons in Maui’s Upcountry areas in forested areas, orchards, and yard hedges.

Hoary Bats are so named because of their grayish white appearance, not because they are old and trite (the second definition for hoary in Webster’s). Declared an endangered species as a precaution as far back as 1970, hoary bats are most often seen in groups over harbors and forests on Kauai, Oahu, Maui and the Big Island. They are sometimes confused with their close relative, the Hairy Bat.

We think manta rays have been given criminally short shrift on this list of 10. In fact, we’re willing to move them all the way up to fourth, behind only the green sea turtle, humpback whale and spinner dolphin. There is simply no possible world in which the mongoose, Nene Goose, chameleon and hoary bat outrank the majestic manta ray, which can grow up to 30 feet wide and are known for their friendly disposition. They also lack a stinger, removing the horrifying possibility of an accidental stabbing. Night diving with manta rays in the coastal waters off the Big Island is an unforgettable experience. On Maui, your greatest chances of seeing manta rays is at Olowalu, the largest and healthiest reef around Maui and location of the fourth largest manta ray resident population in the world. Home to over 350 manta rays, this is the perfect area for snorkeling or scuba diving on your next trip.

There are currently around 40 species of sharks found in the Hawaiian waters, eight of which are commonly seen near shore, including whitetip reef sharks, blacktip reef sharks, sandbar sharks, scalloped hammerheads, and tiger sharks. Maui Ocean Center’s Shark Dive Maui gives certified scuba divers the opportunity to bravely dive with more than 20 sharks in a giant 750,000 gallon tank.

We’re not sure what Hawaiian monk seals do for a living, but if the photo of this one above is any indication, it probably doesn’t pay very well. Recently we got a glimpse of Hawaii’s Ilio-holo-i-ka-uaua, or “dog that runs in rough water,” chilling on the shore near Sands of Kahana Resort in scenic West Maui. It spent roughly eight hours, or the equivalent of a full-time job, sleeping, lounging and barking in the sand. Minimum wage notwithstanding, it sounds like a great job!

Here at Vacation Now, the web’s number one provider of discount getaways to Las Vegas, Maui and Orlando, we have an innovative approach to vacationing where resorts work with us on wholesale pricing so we can offer you deep discounts on their behalf.  In some cases you won’t have to pay anything except a refundable deposit.  We get discounted rates through direct agreements with our resort destinations, including Sands of Kahana Resort in breathtaking West Maui.

You can enjoy a Maui getaway for less when you book with Vacation Now. We have an innovative approach to vacationing where resorts work with us on wholesale pricing so we can offer you deep discounts on their behalf.  In some cases you won’t have to pay anything except a refundable deposit.  We get discounted rates through direct agreements with our resort destinations, including Sands of Kahana on Maui’s beautiful west coast.

Casually tropical, definitively Maui, Sands of Kahana is ideally situated between Kapaula and Kaanapali, near to the nightlife of Lahaina and the gorgeous sand beaches of West Maui. Close to everything yet strategically removed from the bustle, Sands of Kahana offers convenient access to all the attractions and spacious accommodations in which to relax, unwind, and get away from it all.

Spacious condominium units come with an array of convenient and desirable amenities, including fully-equipped kitchens, washer-dryers, and private lanais that look out onto spectacular ocean views. Sands of Kahana offers an array of fun activities and convenient amenities, including tennis courts, putting green, barbecues, separate adult and children’s pools, and an onsite restaurant and bar.

Sands of Kahana has everything you need to experience the vacation of a lifetime. In exchange for taking advantage of our discounted rates, purchasers of Vacation Now packages agree to participate in a resort preview at their destination, where you will see all the amazing amenities and benefits the properties have to offer. As you’ll discover once you’ve taken your preview, Sands of Kahana is a wonderful vacation destination.

We think one of the most important things in life is making positive memories, and one of the best ways to do that is to take a Maui vacation now through Vacation Now. So what are you waiting for?